Get out of your comfort zone. 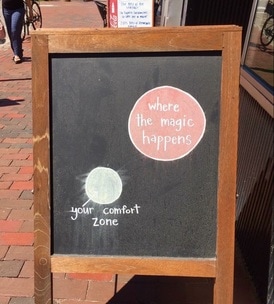 Imagine you are eighty, sitting in a rocking chair and reflecting back on your years. What would you have done more or less of? What advice would you give yourself today?

My 80-year-old self lives to tell stories -- the more outrageous the better, she'll do anything for a laugh.  In fact, I think about things in terms of "will this make a good story when I'm eighty?" The story-quality barometer helps me check that I'm living a colourful and creative life. In 2016, when this journey began, my inner 80-year-old had been urging me to go on adventure. She said that I had become a bit boring and she's complaining about having to repeat the same stories.

I am not sure I can really say that I always dreamed of growing up to be an adventurer. I grew into it. Step-by-step I grew into someone who proudly coloured outside the lines, making unconventional choices and swimming upstream. Yet somehow I awoke up after years and realized that comfort had enveloped me like the smoky haze when you leave a cake in the oven too long. I'd left my life in the oven too long without reflection and "adult-ing" had gotten in the way of that person I’d dreamed of being. By traditional standards, I had made some pretty solid progress: I lived in beautiful Vancouver, BC; I was surrounded by close friends and family;  I had a stable corporate job, a cozy apartment with a sofa that I had actually purchased (a sign that you're officially a grown up). But a small voice inside me nagged, saying there was something more waiting just outside my comfort zone. A Normal Life is not what I imagined for the title of my memoire.

A few years ago, I stumbled upon a TED talk by New York graphic designer Stefan Sagmeister who shuts down his studio for 1 year, every 7 years. He determined that instead of following the traditional learn-work-retire life model, he could take 5 years from his retirement and intersperse those years into the working period of his lifespan. Isn't that a brilliant idea? This idea lay dormant somewhere in the deep recesses of my unconscious (a kind of scary place) until it came bubbling up while I was at THNK School of Creative Leadership last spring. Feeling a bit lost in my own life as close friends were moving on to marriage, homes and babies, I was desperately trying to figure out my passion and purpose to give my life an anchor (or perhaps a compass? Nautical metaphors are not my strong suit). That ill-fated phrase of "what to be when I grew up" haunted my inner child who hadn't yet committed to being a grown up in the first place.

"If you are looking for something you've never had, you'll have to do things you've never done." - someone wise

My 80-year-old self knew that I needed to get out of my comfort zone and be re-inspired in my life, both personally and professionally. ​Personally, I had been clinically diagnosed with 'fernweh,' the German word to describe an ache for distant places, a craving for travel... essentially homesickness for a place you haven't been yet. And my symptoms were bad. Moreover, if I wasn't going to be doing life according to the official "white picket fence" statute, what else did I want to be doing? Professionally, I had spent the last ten years facilitating complex change in the health sector (what a mouthful) and I was attempting to figure out what I wanted to be NEXT when I grew up. Broadening my horizons and exploring would be a tonic for both.

I started off with the simple idea of taking three months off to travel and then maybe finding a new job. But soon I realized I wanted something with more purpose than just traveling... and secretly, I think I was too tired to even think about being on the move every few days, living out of noisy hostels, stuffing and un-stuffing my beloved backpack. So the plan quickly evolved to six months in three unique locations, allowing me to establish a home-base and then I planned to take a class to give some structure: learning to salsa in Cuba, baking the perfect croissant in Paris, and braving improv theatre in NYC... you know, bucket list things.

With advice from Kate and Sarah, my fabulous THNK Faculty, the plan to travel for a few months went through a metamorphosis as I  examined where my personal and professional goals intersected... and thus my "soul sabbatical" & year-of-learning was born. The plan? Take 18 months-ish to visit four countries, for four months each, and try on four different work situations through "mid-career internships" ... of course, doing super amazing, instragram-jealousy inducing travel things along the way. (Side note: I think it's extra credible when you have to make up new terms to describe what on earth you are doing with your life. You should try it.)

​My "soul sabbatical" is designed to restore my creative juices, rejuvenate sense of adventure and refresh my outlook on (and understanding of) the world... while positioning myself for my next professional step. Unlike other more traditional sabbaticals*, this year isn't about pressing pause on my life. It is designed to accelerate change and growth. I am listening to that small voice inside, asking me to see what else is out there.
​* the fine print: let's get another thing clear, I use the term sabbatical loosely since I actually quit my job, but I think it honours the intention appropriately.

Trust the timing of your life

This isn't the first time that I've done something a little unconventional (and hopefully not the last). I made the decision to switch universities after second year while I was backpacking in Italy... not because a pro/con list help me achieve clarity but because a passing train had the university's initials on its side... in the school's emblematic blue and yellow colours. Coincidence? I think not. To get over my fear of public speaking, I did stand-up comedy, naturally. After completing my degree, I spent five months backpacking around southern and eastern Africa, rather uncommon in 2007 but it was a trip which shaped the rest of my twenties.

Even though my adventure muscles are well-toned, I was nervous. I am in my early 30s. After more than a decade of hard work, I was going to halt my successful career so I could travel the world like a free-spirited 20-year-old (again).  But unlike a 20-something, it felt like I had a lot more to lose.

But then the harsh reality hit me square between the eyes: It’s never going to be the right time and it's never going to be less scary. Things will always crop up and life always gets in the way. I knew I needed to do it anyway - make the time, save the money, trust the process and realise that most things can simply be picked back up upon your return (especially jobs) with few, if any, consequences. Sometimes you just have to give yourself the pep talk. "Hello you badass bitch. Don't be scared. You'll do great. Love you." And on days were pure optimism wasn't working, I was reminded that I pitched this crazy idea to over seventy people during THNK, asking them to help me make it a reality... and there is nothing like a very public declaration to hold a stubborn person to their word.

​No matter what, it’s a daunting step to take. Unknowns and what-ifs abound. Making big life change is pretty scary. But you know what is scarier? Regret. So take a moment and ask yourself if you would benefit from a soul sabbatical... then start planning.

Need inspiration? Check out my plan here.
​“Twenty years from now you will be more disappointed by the things that you didn’t do than by the ones you did do. So throw off the bowlines. Sail away from the safe harbor. Catch the trade winds in your sails. Explore. Dream. Discover.”
— Mark Twain